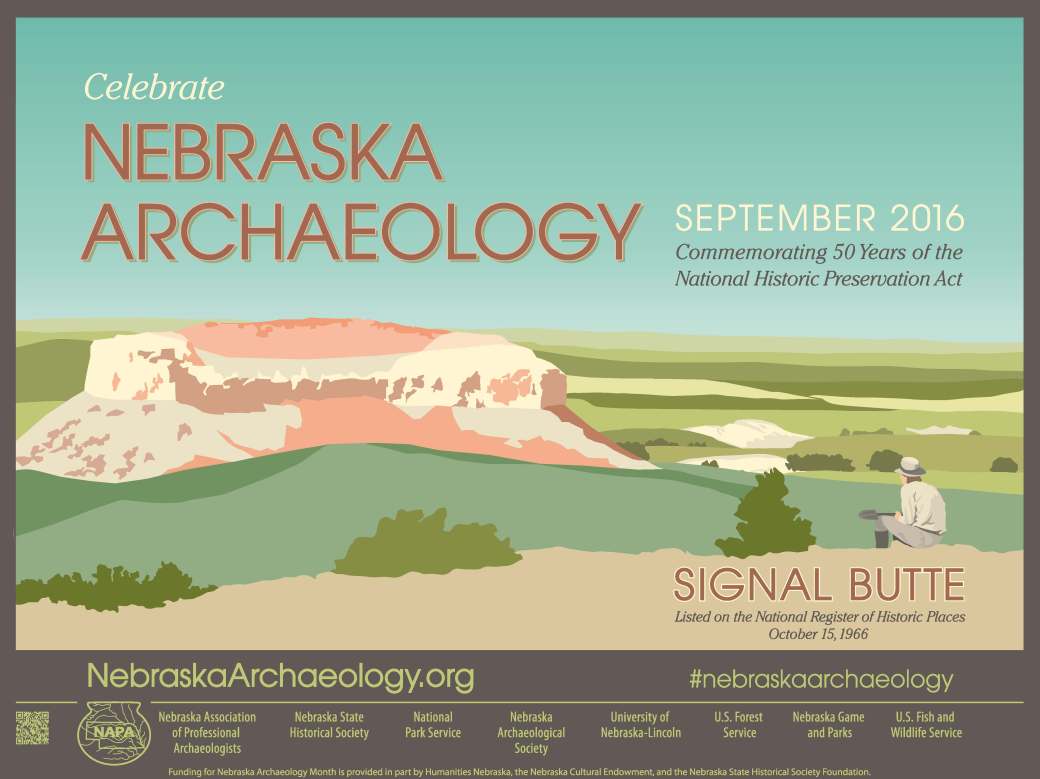 Of the programs established by the Act, the National Register of Historic Places (NRHP) is the perhaps best known. In an effort to recognize the Nation’s historic places worthy of preservation, this official list was authorized by the National Historic Preservation Act on October 15, 1966. The first properties listed on the NRHP included all previously designated National Historic Landmarks, including several of Nebraska’s most noteworthy archaeological sites. In order to highlight Nebraska Archaeology while making a connection to the NHPA, it was decided that one of these sites would become the focus of the 2016 poster. After going through photo collections housed at the Nebraska State Historical Society, a 1932 photo taken of Signal Butte by Clarence Lorenzo Dow, then a geography student at the University of Nebraska – Lincoln, was chosen to become the image for Nebraska Archaeology Month 2016. 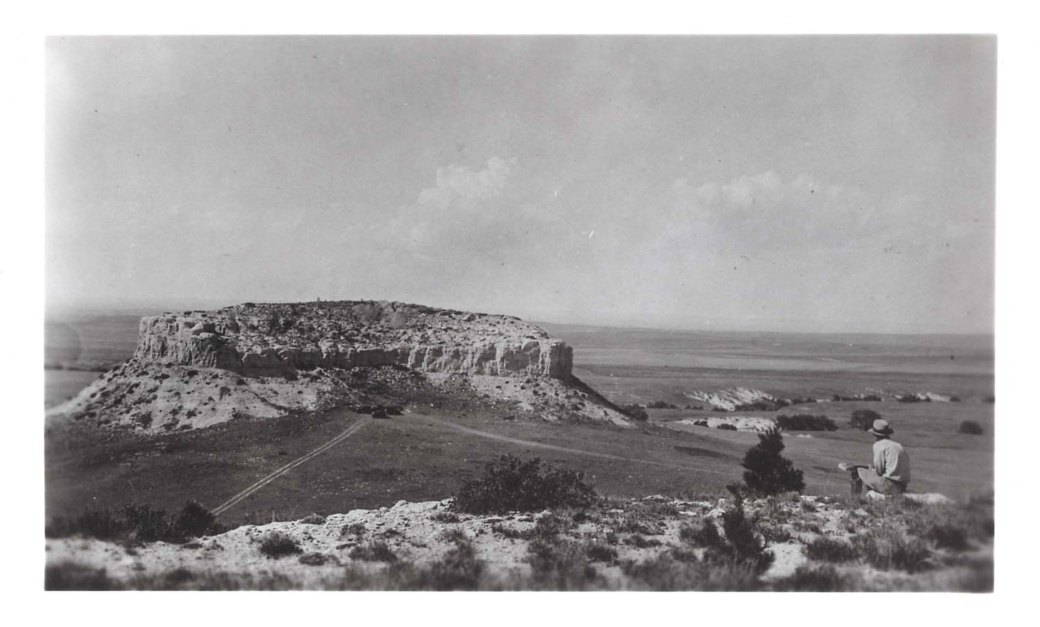 Located in Scotts Bluff County, Signal Butte has been considered to be one of Nebraska’s most important archaeological sites, and was designated as a National Historic Landmark on January 20, 1961. Capped with a thick mantle of gravel and windblown soil, three distinct cultural horizons were found to be located on the butte, with the two deepest levels dating between 5,000 and 1,500 years ago. Initial excavations at Signal Butte took place in 1931-1932 by William Duncan Strong (Smithsonian Bureau of American Ethnology) along with an University of Nebraska Archeological Survey field party led by Waldo R. Wedel. The original photo taken by Dow shows 1932 field crew working on top of the butte, with their vehicles below. Archaeologists, including Wesley L. Bliss and John L. Champe, returned to the butte in the late 1940s and 1950s in order to further investigate the site’s nature and stratigraphy. It was determined to have likely served as a seasonal hunting camp for its inhabitants as well as a processing area. The site is also notable in the history of archaeology itself, having been one of the first sites to be dated using the radiocarbon method.

Besides being an incredible archaeological site, Signal Butte also has special ties to the Nebraska Association of Professional Archaeologists (NAPA), being the image found on the William Duncan Strong Award plaques as well as having been the subject of the Association’s first logo!

Designed by Courtney Ziska and Robert Cope, the style of this year’s poster was inspired by the logos created by Preservation50 in commemoration of the NHPA (http://preservation50.org/use-the-logos/). The poster was first unveiled during the Governor Proclamation Signing Ceremony on August 10th, 2016. These posters will be sent out to participating Nebraska museums and libraries, as well as to NAPA members and handed out at Archaeology Month events. If you are unable to attend an event to pick up a poster, they are also available upon request (email nebraskaarchaeologymonth@gmail.com for more information!)