The Nebraska Association of Professional Archeologists is pleased to announce that Peter Bleed has been presented with the William Duncan Strong Memorial Award in honor of his significant contributions to Nebraska Archaeology. The Award was presented to Peter on October 13, 2016 at the joint UNL Anthropology Reunion/Thursday Night Reception of the 74th Plains Anthropological Conference in Lincoln, NE. 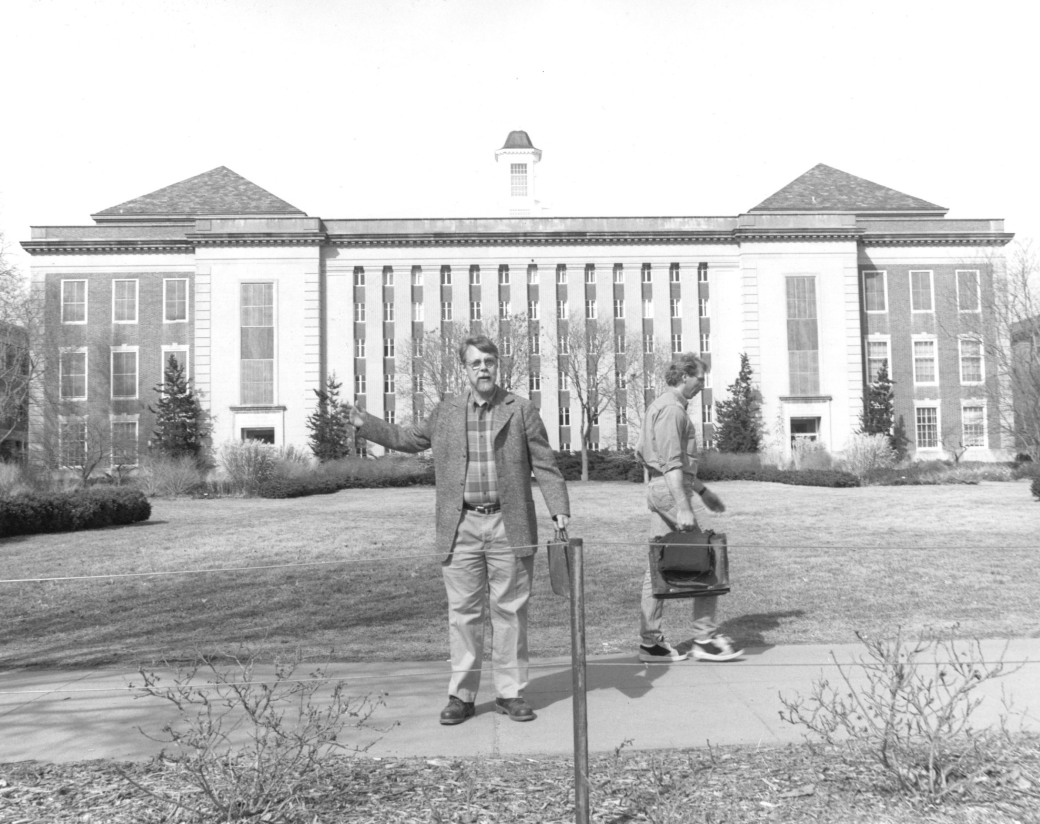 Peter on his way to the State Legislature

From the award nomination:
“Shortly after earning his Ph.D. from the University of Wisconsin, Peter Bleed landed in Lincoln, Nebraska 44 years ago (1972) and Nebraska archaeology has been the better for it ever since!

Peter came to us as a University of Nebraska-Lincoln, Department of Anthropology faculty member where he has remained for his entire professional life. During his tenure at UNL, Peter served in many roles, including Anthropology Department Chair, President of the Academic Senate, and Associate Dean. Perhaps his greatest role, however, was that as a professor and mentor to hundreds of students, including sitting on over 70 thesis committees (and chairing about half of these). His presence in the classroom covered a wide array of topics but he is particularly noted for teaching primitive technology and lithics, museum studies, Old World prehistory, and many archaeological summer field schools. Over four decades, Peter’s scholarly interests covered a broad range of important topics and he authored or co-authored over 80 books and journal articles in addition to countless technical reports. A short-list of his research interests include: battlefield archaeology, Japanese prehistory and material culture, chipped stone tool technology, theory in archaeology, and Great Plains prehistoric and historic material culture and architecture.

Beyond his professional service in academia, this nomination for the Strong Award focuses on Peter’s emphasis on engagement and advocacy, with a deep passion for bringing archaeology to the public. As a founding member and former president (1992-94, 2010-12) of the Nebraska Association of Professional Archeologists (NAPA), Peter worked to make archaeological learning opportunities accessible to all ages, while continuously advocating on behalf of Nebraska’s cultural resources to the State Legislature. In this manner, he was instrumental in drafting and seeing into law the Nebraska Archeological Resources Preservation Act – a measure which created the State Archeology Office. His enthusiasm for promoting and preserving our state’s history continued through his role as a Nebraska State Historical Society Trustee for many years, including president from 2006-07, and also his service on the NSHS Historic Preservation Board from 1989-2002 and again in 2007.

On a local level, his dedication to cultural resources continued as a longtime board member for the Preservation Association of Lincoln (PAL), where Peter aimed to share his enthusiasm of our capital city’s rich past with all its residents, while working to hold city and University decision makers accountable for their responsibility in regards to our archaeological and architectural resources. His perseverance in advocacy efforts will certainly not be soon forgotten by any of those he had a chance to interact with.

During the 2012 UNL Field School in Archaeology

Throughout all these roles and into retirement, Peter has worked consistently and tirelessly to make archaeology relevant to the public. He is passionate about telling the world that our heritage is what defines us and understanding the past through places and things makes for a richer present and future. There are a lot of archaeologists in Lincoln but Peter above all others is a model for carrying that message whether it be in the classroom, at artifact shows, in the chambers of the legislature, or digging holes in the alleys and backyards of Lincoln. The archaeological community in Nebraska will feel the void left by Peter as he begins his new adventures in Arkansas, but Little Rock is more fortunate to have him than they can possibly realize.”

On behalf of NAPA, thank you Peter for everything you have contributed in furthering Nebraska Archaeology and outreach/education efforts! We look forward to hearing about your Arkansas Adventures!